skip to main | skip to sidebar

I recently was sent the Foreign Policy Statement from the Ron Paul Campaign by a friendly Ron Paul supporter.

My Response:
"all those points are very good ones and even the ones I disagree with have merit behind them.

I WANT to discuss those issues. Discuss them with you, with Ron Paul, and with the rest of the LP and the wider libertarian movement.

And yet, there's the rub.

When people Ron Disagrees with want to discuss Foreign Policy, for example, he gets all wound up and angry. He uses terms like "neocon" in an inappropriate and insulting manner, and frankly a clearly incorrectly.

I don't appreciate him shutting down discussion by calling anyone names, much less calling me a "neocon".

I also don't like him calling me a "Zionist" in an inappropriate and derogatory manner.

You see, through decades of being a leader and activist in the California LP and the wider libertarian and freedom movement of Southern California, I've become allergic to that.

For too many years, the Ron Paul disciples have all spoken to me, and about me in this kind of derogatory manner.

And you know what? After a while I realized I didn't have to keep my head down and take it anymore.

It cost me a few elections, but so what?

If I were President, and I never will be, I would not only want a Donald Rumsfield as a foreign policy advisor, but I would also want a Ron Paul type. He'd have to deal with the racism problem first, but certainly his type of philosophy.

You see, I'm all for being careful about spending money overseas in any way, and doing as little as possible, if in fact doing it not at all could be achieved, so much the better.

Ron Paul accuses me of being a profligate spender of the lives of young Americans. And it's just insulting.

He shuts me and anyone else down before we can even discuss the matter with him and frankly, I'm tired of having a conversational partner that doesn't want to converse.

I feel the same way about Israel and Hamasbollah.

Ron Paul doesn't care what I say or what my concerns are.And that's my problem with him on Foreign Policy.

I'm 100% good with his positions, minus the racism, to be worthwhile points that MUST be considered before we send children and rifles overseas to settle my personal interests.

I still want to know more about Newslettergate.

I have problems with the racist comments, the racists supporters, the racist newsletters, the meetings for lunch on Tuesday at Thai food or whatever it was that Doctor Paul has never denied meeting with these people for.

I want to know about his relationship with William Carto.

I want to know why he thinks Hezbamas and Iran are morally equivalent and even superior to Israel and for him to explain how Israel ripped anyone off, much less any Palestinian Arabs.

But it all comes back to the fact that Ron Paul and his staff, supporters and friends all call me names.

I don't appreciate the Jew Zionist Neocon crap every time I say I'm concerned about some Foreign Policy Issue.

And every time Ron Paul does so, I'm going to cry racist.
Posted by Bruce Cohen at 6:21 PM 3 comments:

Gary Johnson had his much anticipated Press Conference this morning at 10 AM Mountain Time in the Capitol Rotunda of New Mexico.

He formally 'left' the GOP yesterday, and has absolutely milked every drop of PR possible out of the process of changing parties.

Gary clearly brings a new standard of quiet and professional competence and confidence to both the Libertarian Party and the 2012 Presidential Race.

Gary has all of the positives you can say about any of the Candidates in the other two parties, with none of the negatives.

What he does have is a track record of successful Governorship of New Mexico. He spoke today of having vetoed more Bills than every other Governor combined in the other 49 states.

Gary clearly counts better than Obama, who has the USA with 57.

Gary is also clearly pro Israel. He clearly pointed out that his position on Israel is one of the three major points he differs with Congressman Paul on.

Governor Johnson said: "Israel is and has been an important Military Ally."
'It's naive to think that Israel won't address the Iranian problem.'

'The US should not give Foreign Aid to Israel.'

'I wholeheartedly support ...continuing to be Israel's Ally Militarily.' (order of sentence halves reversed for clarity)

Gary wants to cut the Military Budget by 43%. He pointed out this only turns the budget clock back seven years. He also proposed that Military Alliances that cost money are not 'Foreign Aid'.

Gary took many digs at Obama and Paul, not the least of which was when he stated: "It's not the messenger, it's the message - it's the agenda", challenging the cult of personality.

Early on, he threw a lot of red meat to the Libertarian crowd stating, "The LP is the Third Party!" He further pointed out 61% of Americans are willing to vote Third Party.

Gary made the case for the Fair Tax, and while I personally disagree, his point that it was 'the best of the worst', and his explanations of how it would be an improvement over the current system are very persuasive and certainly could resonate with voters at least as much as the Herman Cain 9-9-9 plan.

Viewership of the live feed rose steadily throughout the Press Conference that began promptly on schedule. This is in direct contradiction to all LP events starting on 'Libertarian Standard Time'.

I caught the feed when it was in the high 600s, ending up at over 1850 viewers.
He raised $8,675.31 raised from 103 donors at end of Conference. Total event fundraising traditionally will be much higher than the first final number.

The Chairman of the Libertarian Party and several other Libertarians, notably California LP Candidate and big Marijuana Legalization guy Steve Collet were in the Audience.

Gary wants to immediately withdraw from Afghanistan, is against Eminent Domain for the Keystone Pipeline, and for term limits and free markets.

The free market thing may be the fourth place where he and Ron Paul differ, since it seems that Gary is not against NAFTAesque treaties.

The audience was smallish, but enthusiastic, and kept the Governor on his toes with a wide variety of questions.

Breaking Live: Three Million Lives on the Line for Freedom! 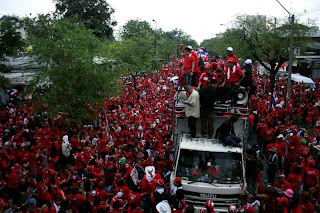 http://www.redshirttv.com/
Three Million protesters in Thailand are demanding the
corrupt and illegitimate government of Thailand step down.

This is the third day in a row that Bangkok is at a standstill.
All shops are shuttered and locked.
There is very little traffic except for the protestors and
the Army.

The protesters have given the Prime Minister ten
minutes to resign, or else.

The military is ready for a fight and has leveled
their weapons at the protestors and have stated
they are prepared to fire on them.

These are real freedom fighters, not some petty
folks defending bad behaving children in the LPCA.

Even if you can't understand a word of Thai,
you can immediately get the gist of what's
happening and the emotions behind it.

All of Thailand is wearing red shirts today.

I fear there will be blood spilled today.

Libertarian Trial of the Decade! 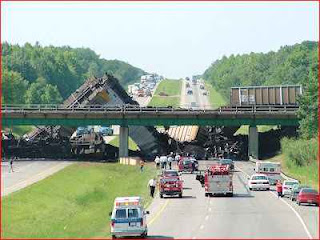 Yes, it's far more interesting and complicated than that, but I'm accussed of puffery and egaggeration far too much as it is.

I haven't been blogging for a long time, work, heath, travel, the sun was in my eyes, the other kids don't like me, I have 1000 excuses.

But there is just too much 'inside baseball' not to cover within the Libertarian Party of California that's not really being discussed elsewhere.

So, for the very few people who are interested in filling in the blanks about the ever deepening scandal and problem, this is one more place to go.

If you hate train wrecks, please look the other way.

About my upcoming trial:

First of all, allow me to have some fun.
This is the Defense's Theme song:

The Defense dedicates this to the Prosecution and their leader,
King Naga and his Knights of the Wobbly Table

Heads Will Roll
by the
Yeah Yeah Yeahs

You can last
Take the past
Shut your eyes
Realize

Off with your head
Dance 'til you're dead
Posted by Bruce Cohen at 11:10 AM No comments:

Wayne Root - The Conscience of a Libertarian